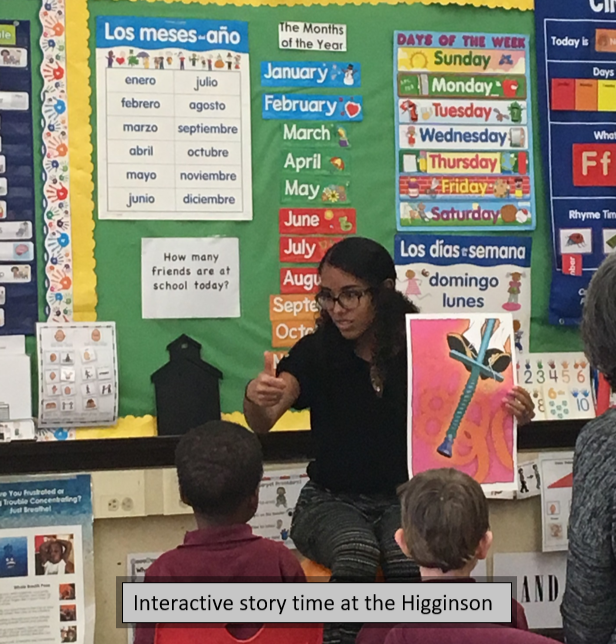 The halls of the Henry L. Higginson K0-2 School overflow with student artwork and vibrant handmade displays emphasizing the values of this close knit community. A wall of “Higginson Heroes” spotlights students who have earned merit badges from “good helper” to “appreciating differences.” The prize for this honor? Most often, students choose cookies and milk with Principal Marie Mullen who knows each of her 171 students by name.

In November, Principal Mullen opened the Higginson’s doors to other school leaders from district, charter, and Catholic schools in the Roxbury neighborhood in the first of a series of school visits for the Roxbury Special Education Network (supported by the Boston Compact), a group that formed in the spring of 2018 around a shared interest in supporting students with disabilities and learning from each other.

As this group of leaders from across the sectors gathered, Principal Mullen gave an honest picture of the school’s challenges: 88% of students are economically disadvantaged, 25% have disabilities, and Principal Mullen estimates that about 40% are trauma survivors. Principal Mullen’s answer to these challenges? Embrace productive struggle. Help instill stamina in the students, an idea that completes the school’s core values along with “respect” and “responsibility.” Mullen explained to the group that, as special education specialists, her staff are used to accommodating students. To compliment this, Mullen wants to help her staff give students the tools they need to solve problems and persevere in sometimes difficult circumstances.

After observing classes and engaging in a consultancy with Principal Mullen about productive struggle in the classroom, visiting educators offered ideas such as positioning paraprofessionals more directly in instructional work, something that Principal Mullen took to heart and has since incorporated into her leadership plans. “Para[professional]s are a valuable resource that we should be utilizing,” said Mullen. In staff meetings she now asks, “how are we using the paras this week? It should become common practice.”

Though Principal Mullen is herself a vetera

n educator who has started two schools including the Higginson, she is grateful for the fresh ideas from her Roxbury colleagues. Ultimately, she noted, this sort of collaboration across sectors in Roxbury is important because “we’re serving the same kids with the same struggles.”